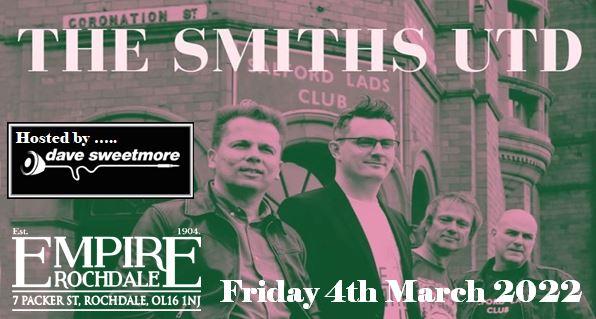 The Smiths UTD – Sound of the Smiths and Morrissey

The most enthusiastic and authentic tribute to The Smiths and Morrissey in the UK!

Since 1996 Dave Sweetmore has been a familiar face on the Northern and UK Music Scene. As an established concert, festival, event and nightclub DJ and host, specializing in ‘the best and coolest records ever made’ he has entertained hundreds of thousands of music fans at many legendary clubs around the UK, and as a concert and festival DJ has worked alongside many bands including Happy Mondays, Inspiral Carpets, Scouting For Girls, Razorlight, The Fratellis, Lightning Seeds, The Selector, Cast, The Feeling, Black Grape, Dodgy, Twisted Wheel, Feeder, and many more. You will also find him at many large tribute festivals. A regular on many radio stations, his own personal Manchester based ‘The Dave Sweetmore Show’, regularly features guests such as Status Quo, Frank Turner, Stereophonics, Shed Seven, James, Travis to name just a few. Dave is also a loyal supporter of new and unsigned music. As a stadium announcer and DJ for the English Football League since 2001, based mainly at Rochdale AFC, he has won many accolades and awards from the likes of Sky Sports and the BBC. Sky Sports named him ‘The Best ever DJ / Announcer In Football’. He also writes a weekly music column for the Manchester Evening Newspaper group and the Quest Media group. Since 2018 Dave has also been the presenter for online tv channel MMTV, an online tv programme showcasing the best in Manchester music, sport, creativity, and inspirational people. Dave is a popular figure on the music scene, with his talents lying as both a hard working great host of events, with his own individual style, and both a crowd pleasing DJ. Musically he plays a mixture of indie rock n roll, britpop, manchester anthems, mod ska and punk classics, old school dance, and motown and 60s cool hits.